Beyond Paradise: The Overlooked Artistic Legacy of Orlando’s Parramore Neighborhood 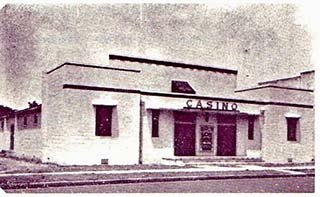 Today known mainly as the location of Orlando’s major downtown concert and sports venues, Parramore once provided a thriving economic and cultural center to black Floridians. During the segregation era, Dr. William Monroe Wells built one of the only hotels in the city at which black travelers could stay. Listed in the Negro Motorist Green Book, the Wells’Built Hotel thus provided respite for black performers and cultural figures who are now famous. This included musicians playing on the Chitlin’ Circuit, the string of venues located throughout the U.S. at which black performers were allowed to play. Renowned musicians of the jazz and big band eras stayed in the hotel and played in Dr. Wells’ South Street Casino next door. This interactive visual timeline juxtaposes the lack of available footage from these performances with that of other events in Florida at the time, such as the filming of Hollywood cinema and tourism videos. It shows that, while the entertainment that came through the Parramore area eventually succeeded in reaching mainstream popularity, depictions of Florida as a paradise drown out the local history.

The South Street Casino was demolished due to fire damage in 1987, but the Wells’Built Hotel survived as the home of the Wells’Built Museum of African American History and Culture. The timeline below uses the Casino’s handwritten ledgers from 1948-1956–provided by the Wells’Built–to juxtapose the vast amount of archival material related to luxury, tourism, and film in Florida with the underrepresentation of black Floridian narrative and culture. Despite searching in several archives across the country, no footage or photographs were found that showed performances in the Casino. The top track of the timeline focuses on performances in the Casino. The dates and musicians were all recorded by Dr. Wells, but the audio and video recordings originate from other sources, and were chosen in an attempt to represent the popular music of that year–the music to which participants in Dr. Wells’ dances might have listened.

The bottom two tracks track the Civil Rights Movement and its impact on Florida in the years that the South Street Casino thrived, as well as some of the archival footage available of Florida on film and local culture.

Use the left or right arrows to navigate all events chronologically, or choose events by dragging the timeline at the bottom.

Thanks for providing support and expertise to this project.